Subscribe now and get the latest offers and promotions

THE STORY OF MOSER

Our life's work is to continue the history of craftsmanship that both defines an era and is remembered for generations. We are committed to keep this illustrious tradition alive and we will develop it further.

One winter’s day in 1857, a talented glass engraver opens a workshop in Karlovy vary. He is 24, fresh from apprenticeships with Mattoni and Hoffmann, two master engravers of the time. 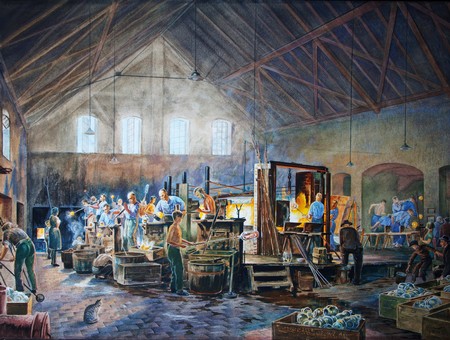 Ludwig Moser’s unprecedented artistry and craftsmanship outgrows his quiet spa town. After lighting up the World Fair in Vienna, Emperor Franz Joseph I, grants Moser the privilege of designing for his court.

Moser successfully presents himself at the World Exhibition in Paris. The Persian Shah Mozaffar-ed-Din visits Moser’s glassworks during his European travels. He becomes passionate about Moser crystal and will soon award Ludwig Moser his personal favour and the honoured title of court contractor.

A collection of Moser vases is awarded first prize in Milan. Combining engraved floral motifs with colourful fusions creates depth and liveliness previously unseen in the art of glassmaking.

Thanks to the success of the Royal collection, Moser becomes the court supplier of Edward VII, the King of England.

Brothers Leo, Richard and Gustav Moser become the owners of the glassworks. Leo Moser, Technical (1908) and Artistic Director of the glassworks (1916), pioneers new types of coloured glass using precious metal oxides. His spirit inspires a generation of designers to come.

Leo Moser personally hands over an extensive collection to Pope Pius XI bearing the engraved papal emblem. From this moment it will be known as the Pope.

Moser is awarded the Grand Prix at the seventh Milan Triennial for his refined cut vases, designed by architect and designer Wolfgang von Wersin.

Another Moser Collection wins the Grand Prix Award at a World Fair, in Brussels this time.

Copenhagen becomes the exclusive drinking collection in Czech embassies around the world.

The glassworks prepares a new collection of the Copenhagen set with the national emblem of Prague Castle and the presidential residence at Lány.

During his visit to the Czech Republic, Pope John Paul II receives, as an official present, a crystal cross created by Moser at the personal request of the president Václav Havel and designed by the artist Karel Bečvář.

A bowl, vase and goblet from the Splendid collection, engraved with the royal coat of arms, adorn the Diamond Wedding Anniversary celebration of Queen Elizabeth II and Prince Philip, the Duke of Edinburgh. Czechoslovak president Edvard Beneš gave the pair a similar set as a wedding gift in 1947.

The People’s Choice category of Czech Grand Design 2012, awarded by the Academy of Design of the Czech Republic, went to Lukáš Jabůrek for his design of the Pear vase. The artwork soon ranks among the bestsellers.

For the 160th anniversary of Moser’s founding, the glassworks introduces a celebratory collection of 80 art pieces, inspired by important and successful works of the company that have brought it recognition around the world.

Tomáš Lesser is awarded the Order of Arts and Literature by the French Minister of Culture. The art of refining spaces, uplifting moments and taking the art of glassmaking to new heights continues.

A short sentence describing what someone will receive by subscribing